Ah, back on (somewhat) track this week. Apart from the effects of some tenacious bugs and a sick toddler, my training was mostly decent this week. Let’s dive right in:

By day 3 of a headache that wasn’t going away no matter what I did or what meds I took, I was stir-crazy (Snip-Its and a half-hour trip to the mall don’t really cut it when you’re feeling ill and otherwise house-bound). I figured my head would hurt no matter what I did, so I might as well get my run in. I loaded up the Bairn and we returned to the Minuteman Bikeway for an intended 2 miles out, 2 miles back run in the relative shade.

It was hot and not entirely shady, but otherwise an okay feeling run… until we hit the bug swarms. Holy. Flies. Batman. They were determined to make our lives miserable. The Bairn was crying because they were in his face, and each time I’d stop to help/reassure him, they’d dive at me. Even if I was running relatively fast, they were still on a mission to invade my eyes. It was brutal. I called it around 1.3 miles in, not wanting to risk venturing to the 2-mile mark, and we turned around and ran back with arms flailing.

Next time, I’m dousing us in bug spray first

In addition to my now-usual routine of leg/hip/core exercises, I also did a bit of an arm workout at work… I moved everything out of our vault, inventoried and photographed it, and moved it back. You can’t see it, but I’m flexing as I type this.

Not much to say here.

I sneaked out between daycare drop-off and work for a hot, hard 4 miles. I’m getting bored of my usual running routes, so I explored some side streets and sub-divisions. While a bit more interesting, it made me long for two loops of the pond so that I could have access to a bubbler and shade. I managed to keep my pace below 11:20 in spite of the heat and my intense thirst, so I’ll take that as one good thing, at least.

The Bairn woke up Saturday with a fever and a bad cough, so I spent most of the day cuddling him on the couch and watching the Cars movies on repeat. Drew spent the day tackling yard work that was weeks – and, in some cases, months – overdue, so I was happy to lie low with our poorly Bairn while he made our yard look less like one that belongs to a haunted house. 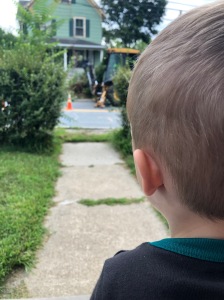 I mean, look at the tree growing out of our overgrown hedges. Yikes.

Could I have done some cross training while the Bairn napped? I suppose… Did I? No…

So. Remember how I wrote up there under Friday that I’ve grown bored of my usual routes? Not remembering how desperately I wanted access to a bubbler two days prior, I mapped out a 6-mile route that prioritized running down new-to-me streets, rather than one with any proximity to water or even shops in which to buy water. Add to that a later-than-preferred start, since Drew slept in longer than expected, and a route with lots of unexpected hills and almost complete lack of shade, and you get one hot mess (me) barely dragging herself along for 6 miles. 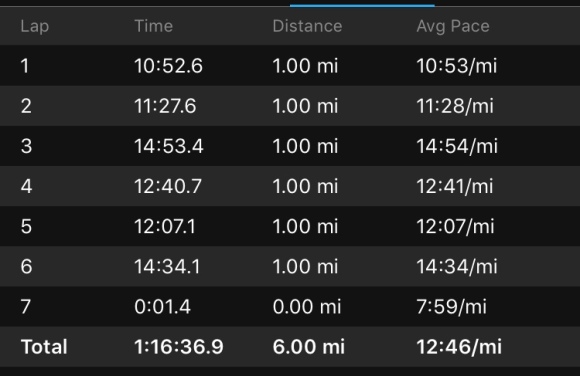 The first mile was okay In fact, maybe too okay. I ran it faster than I wanted, but this whole run I struggled to keep my pace sustainable. I was hot and so, so thirsty, but my legs wanted to chug along faster than my brain wanted. So I ended up taking a ton of walk breaks. I don’t know what’s better… running more at a slower pace, or running a bit faster and taking more walk breaks? Pre-Bairn, my long runs while training for a half had me doing the former, and my paces were pretty similar to this run, which was the latter. Six of one, half dozen of the other, I suppose.

I was starting to flag by Mile 2. Mile 3 was a little ridiculous. I got lost, several times. Well, not totally lost-lost… I knew generally where I was, but managed to miss the streets I was meant to turn down, again and again, so I kept stopping to pull out my phone and check Google Maps. (This is what happens when I choose new routes, eh?) Miles 4 and 5 were miserable, but not the worst. When I hit mile 5.5, I pretty much gave up and walked home, except for the last tenth of a mile or so, when I had to run to cross a busy street.

If I don’t opt for bubbler-filled-but-boring routes, I think I need to start carrying water on these long runs, which will continue to only get longer for the next several weeks. To be honest, I don’t even know where my sub-optimal hand-held water bottle thingie is anymore. It leaked, the water warmed up super fast, and it didn’t hold nearly enough, but man, I missed it on Sunday.

Next week actually calls for a 5K race rather than a second week of 6 miles. I haven’t decided if I want to sign up for a random race, try to “race” 5K on my own, or just run a long, slow 6 again. I have a week to decide…

Would you follow the training plan and race, or do another long run?

Is one of those hydration backpacks worth it for these hot, summer long runs? Or is my inner gearhead just trying to get me to spend unnecessary money on new kit?